‘the sort of show that makes you excited about the Fringe again‘ ★★★★★ – Broadway Baby, praise for Murdered by Murder.

Lovehard are currently touring their  multi-character pastiche shows Murdered by Murder (2017 -rated one of the top five free shows at the Edinburgh Fringe, Daily Record) and Tales from the Elsewhere (2018), spoofing the haunted-house horror and alien/coming-of-age (think E.T./Stranger Things) film genres respectively at venues across the UK, for tour dates and details click here. 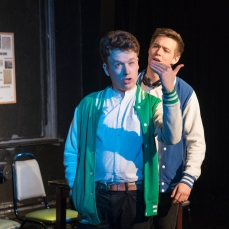